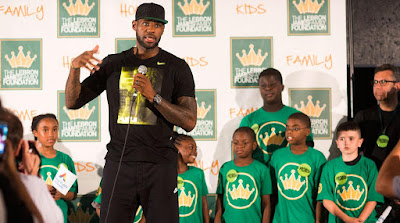 In the past few years there has been a backlash against athletes for sharing their beliefs -- as if because they are athletes in the spotlight, they don't have the right to have an opinion or a thought.  Sometimes because they are multimillionaires there are those that believe their thoughts shouldn't be valued as much as those who aren't.

We now live in a society where we can't disagree without being disagreeable.  If someone has a different opinion they must be wrong and we get hateful and hurtful in explaining why they are wrong.

Recently, Fox's Laura Ingraham made the following statement after she disagreed with Lebron Jame's opinion on President Trump:

"It's always unwise to seek political advice from someone who gets paid $100 million a year to bounce a ball. Keep the political comments to yourselves. ... Shut up and dribble."

I bring this particular instance up because yesterday Lebron opened I Promise School, a public school with the goal of assisting at-risk students in the 3rd and 4th grade in the Akron area.  It was done in conjunction with Akron University.  It was built in large part with over 40 million dollars from Lebron’s foundation.

Ingraham's comments reminded me of a story I once heard about legendary Boston Celtic center Bill Russell.  Russell was somewhere with teammate John Havlicek when a woman stopped, surveyed Russell's height and said "Are you a basketball player?"

After the woman left, Havlicek asked Russell why he chose to mislead the woman.  Russell replied:

"I didn't mislead her.  She asked me if I was a basketball player.  I am a man that happens to play basketball.  It's what I do -- it's not who I am."

We see these athletes, or actors and actresses, and musicians and we overlook that they are people.  People that have had experiences and often give back in important ways.  Can we disagree with their opinions?  Absolutely.  But they have the right, the freedom, to have and share as much as anyone.

As someone that has been blessed to have coached some athletes that have been able to make a living doing what they love.  I know they have shown through their heart -- through their work, their love and their pocketbook how to give back and make an impact.  Athletes I've coached like Seimone Augustus, Kelsey Bone, Sylvia Fowles, Shaquille O'Neal, and Temeka Johnson have done amazing work through their own foundations and volunteer work.

While certainly there have been an occasional athlete who has fell short in their foundation goals, the large majority of them have done amazing things for their communities and causes close to their hearts. Far more than we can count.

Lebron, thanks for not shutting up and dribbling!

Email ThisBlogThis!Share to TwitterShare to FacebookShare to Pinterest
Labels: Comentary 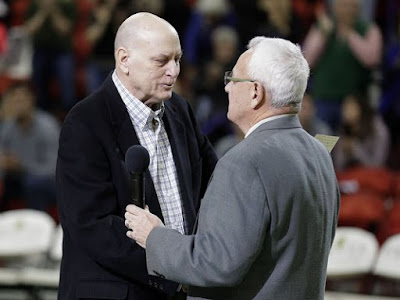 We were certainly sad to hear of the passing late last month of Coach Mike Heideman.  He was an outstanding teacher of both motion and defense — including the Pack Line.  He was a part of Dick Bennett’s staff at Wisconsin Green Bay and later was head coach there as well.

Heideman told Bennett, 'I would like to help you build a very solid Division I program,'" Bennett recalled earlier this year. "Over the next number of years, that happened. I received most of the credit. But the real truth is, the guy who did not get near enough credit was Mike Heideman.”

It is a mark of the best coaches to adjust or even change when circumstances dictate. Of the change from pressure defense to gaps, Coach Heideman said, “Survivial forces us into the Pack Line Defense.”

1. Build from the basket out.  As Bennett would often say, “How you defend the low post dictates how you defend everything else.

2. Heideman referred to the arced area as “a house...and we don’t want to let anyone in our house.”  In fact, they had no problem with passes around the arc unless they were of the penetrating nature.

3. Ball Defense started with the defender’s heels on the arc.

A key teaching point on ball defense that we incorporate is when the ball handler has the ball above the waist we “Jump Up” putting extreme pressure on possible passes or shots.  When the ball drops below the waist, we “Jump Back” to defend possible dribble penetration.

Heideman taught all non-ball defenders to be in a slightly open stance towards the ball.  Our terminology is “show your hip to the ball.”  And he wanted them “up the line” but “off the line” in the gap.  It should be noted that they did deny passes inside the arc but even then it was only an arm in the passing lane — their terminology was “scratch the passing lane.”

On screens away from the ball, it was important to Heideman to defend them all the same.  He wanted simplicity and consistency.

“Take the shortest route” was terminology used wanting them to slide through on the ballside.  If it’s a curl cut, the screen defender is responsible for extending and bumping.

KEVIN EASTMAN ON THE IMPORTANCE OF UNREQUIRED WORK 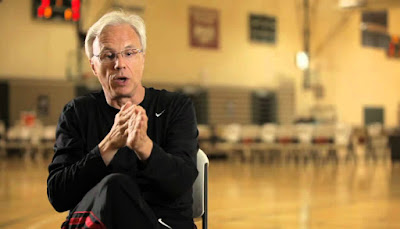 My first opportunity to meet Kevin Eastman was during my tenure at the University of Central Florida which was hosting Coaching U Live. Kevin is one of those people that genuinely cares about coaches and helping them grow.  Just a few conversations in our offices and I was blown away with the level of his knowledge and his ability to communicate it in such a way that instantly made me better.

Since then I make sure I'm attending Coaching U Live or subscribing to their streaming video of each session.  Great speakers are lined up each year but none that I look forward to hearing more than Kevin.

A few years ago we brought Kevin in to speak to our team.  The messages he delivered that day was intentional and specific to our team and impacted our success that year.  I would highly recommend any program, of any sport, to bring Kevin in to speak -- it will instantly elevate your program!

Kevin is working on a book now, "Why The Best Are The Best," and we are honored that he is sharing a small excerpt on our blog today.  By the way, this was one of the great stories that Kevin shared with our team:

Doc usually liked to take Kevin (Garnett) out of a drill after five or six repetitions because he wanted to save Kevin’s legs for games. Kevin had logged a lot of miles and wear and tear during his career, and he always practiced at game speed every minute we had him on the floor.

After five possessions Doc told one of our rookies, Leon Powe, to replace Kevin to give him a break. Kevin was not going to have any of that. As Leon said, “Kev, I got you,” Kevin said he wasn’t stopping, only in far-more colorful “KG” language. Leon turned to Doc and Doc told him again, “Take him out.” Leon received another emphatic “NO” from Kevin. Finally, Doc had to nearly walk Kevin off the floor so we could get Leon in.

Once convinced to leave the drill, Kevin moved to the adjacent court, and as the eight players in the drill were talking and sliding and yelling out the defensive terminology each situation called for, we all heard another voice. The voice came from the other court, where Kevin was the only player. No other players, no ball, not a single other coach or person—just Kevin. There he was, sliding and talking and pretending to go through every action he would have had he still been in the actual drill. When the teams involved in the drill switched from defense to offense, so did Kevin. He yelled out all the offensive terms we employ: use me – use me; flash – flash – flash; rip – rip – rip. 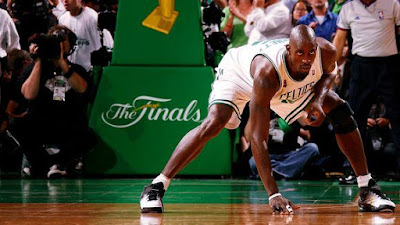 What we learned that day watching and listening to Kevin was the true definition of unrequired work! Kevin knows that repetitions are what makes him one of the best at what he does. And like all successful people, he understands that his repetitions are what created his reputation. Or as I like to say “your reps create your rep!” Kevin’s way of saying something similar was: “If you want to kick me out of a drill, you have to kick me out of the gym.”

That day Kevin gave an incredible success lesson to all of us that it’s the unrequired work that will separate the great players and the great teams from all the rest. He didn’t have to do that work. It wasn’t work required of him. But he is Kevin Garnett because he does the unrequired work.

These sorts of lessons and more will be explored at Kevin's second annual "Elite Training Camp". ELITE TRAINING CAMP is a two-day intense learning environment for any coach who wants to learn more about the Xs and Os of the most recent trends in basketball and how to prepare for the next step in their coaching career. It provides an opportunity to exchange ideas and experiences with other coaches in an intimate setting. Coach Eastman has developed the content and will share what he has learned in his 35+ years in coaching. ESPN basketball analyst JAY BILAS will join Kevin as the guest speaker. The event will be held at The Levin Center at Queens University in Charlotte, North Carolina August 10th and 11th. More info about ETC can be found HERE.