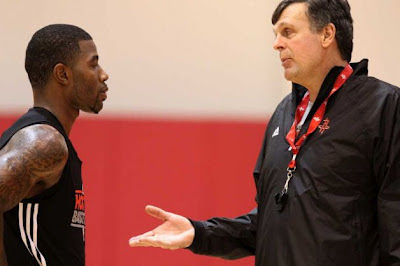 +
I greatly enjoyed speaking at the Kingwood Park Coaching Clinic this weekend.

Visited with some old friends...
Made some new ones...
Learned some basketball...

Here are a few of my notes from Kevin McHale:

"Young players don't want to master one move -- they want to try and learn the full package at once."

McHale talked about watching Dwight Howard shoot right-handed hook shots at pre-game workout and he went three for 10.  He then switched to the left-handed jump hook.  Why switch after a 3-10 effort -- stay and work until you get it 7 or 8 for 10.

He talked about Kareem Abdul-Jabbar who beat team after team with the same old borring right hand sky hook from the right block.

"The only way to get better in the post is to play and practice in the post."  McHale talked about watching post players free shoot working on their 3's instead of their post game.

Key to Boston's success is that they didn't care about the score.  They wanted to beat you every possession.

Red Auerbach to a young McHale: "You're going to be a good player buy how much better will you make your teammates?"

The thing that impresses McHale about a coach is when he can get he is team to play as one on defense.

If your best player isn't your most committed, you're in trouble.

"Outside of my father, my high school coach was the most influential person in my life."

"You have to spend time with people to gain their trust."

McHale tries to have a daily conversation with each of his players.

"If you not more talented, you must outwork your opponent."

Must work on closeout drills every day.

Best way to defend a re-screen is not allow the cutter to use it -- push him away from it.

Teach a shot blocker to block shots with either hand.

What made Bird and Magic special is they could shoot only 11 times and still dominate a game.  If you could hold Jordan to 11 shots you had a chance to win.

Games are won in the paint.

After practice the Celtics would stay in the gym and play shooting games and other things -- "we were gym rats."

McHale thanks there are great days ahead for the NBA because of the caliber of "people" in the league...spoke specifically of Kevin Durrant and Derrick Rose..."they aren't just great players, they are world class people."
Posted by BOB STARKEY at 6:18 AM