ACCOUNTABILITY MUST START AT THE TOP 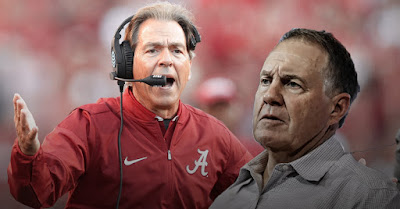 Without question, in the very best of organizations, accountability starts at the top.  There are few things more powerful then when the leader stands up in front of all and takes the credit for failures with his team.

I'm not surprised that Alabama's Nick Saban did just the that with his post game comments after loosing to Clemson in the National Championship game:

“I just have a feeling that I didn’t do a very good job for our team, with our team, giving them the best opportunity to be successful, I always feel that way, even sometimes when we win, I think there’s things we could do better or that I could have done better. But particularly in this case, never really ever got comfortable with what we needed to do to win this game, especially on defense, especially the matchups we had in our secondary versus their receivers. That was something that was kind of bothering me going into the game, and as the game unfolded, it worked out that those matchups were a big difference in the game.”

Another reason I believe he took that approach is that he worked for and learned from another coaching/teaching great in Bill Belichick. In the book "Belichick" by Ian O'Connor, the writer talks about the Patriots locker room after New England's loss in Super Bowl XXLI.  After all, the Patriots had completed a perfect season to that point with a record of 18-0 before a heartbreaking loss to the New York Giants 17-14 kept them from making history.

Here is what O'Connor wrote about the post-game locker room:

Almost to a man, the Patriots were slumped at their lockers and silently blaming themselves.  Ever after a soul-crushing defeat, these players were wired to look in their own mirrors when assigning culpability.  It was part of the ethos of what would become known as the Patriots Way.

Into this dark abyss stepped the head coach of the New England Patriots.  What is he going to say? players thought to themselves.  What can any coach possibly say in this moment?  Belichick stood among these shattered men and started to speak.  “It’s more emotional than I’ve ever seen Bill,” said Heath Evans.

As low as he’d ever been, Belichick rose to his chief responsibility.  “He said, ‘We didn’t prepare you guys well enough.  The coaches didn’t do a good enough job, and that falls on me.  I didn’t prepare you guys well enough, and I’m really sorry for that,” Stallworth recounted.  “He didn’t blame the coaches.  He blamed himself for everything and he apologized for that.  He could easily said, ‘It sucks, but we dint’ make enough players.’  He didn’t mention the players at all...To me, that shows a lot about who he is as a person.”

As a leader, part of taking charge is taking ownership of the failures and giving credit to others for victory.  It's what the best leaders do.