FOR SABAN, BYE WEEK ABOUT IMPROVEMENT NOT TAKING A WEEK OFF 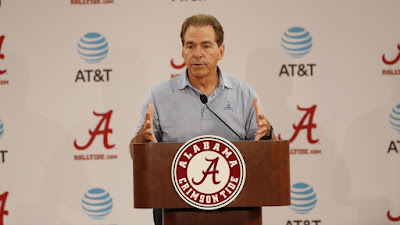 A reason for everything.

Fight for your culture everyday.

Coach Saban is about the process.  What is being done at this particular moment to make us better.

It fascinates me to watch how Coach Saban never misses an opportunity to maintain the philosophy of process -- to hold strong the culture of daily improvement.  The language and daily message to his team is critical to this process.  This was true again at his weekly press conference where he explain the way they view an off week:

"I think the players got the idea from what I talked about yesterday at noon, was can you create momentum during a bye week by what you do. Define what a bye week is. Is a bye week a week off or is a bye week a week that you don't have a game but you have an opportunity every day to go out and improve on the things that you need to improve on, whether it's from a mental intensity standpoint, having lapses. Whether it's in a game. Those things happen in practice. So you practice those things so that you have the opportunity to improve."

"A bye week is also about getting rest, getting hydrated, working on your strength. We try to balance those two things but we also take a lot of things that we're going to face in the next four weeks and try to get a little bit of work on all those things. So that's what we tried to do today. “ 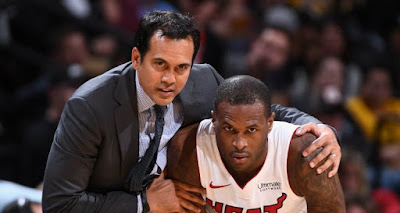 Gregg Popovich speaks to the keys of Erik Spoelstra's success in an article in the Miami Herald written by Anthony Chiang:

“First of all, he did his work,” Popovich said. “He didn’t just pop up all of a sudden. He worked hard in the organization and learned the right way from coach (Pat) Riley. It was obvious he had not just basketball knowledge, that he knew about the game and he had his Os and Xs and knew what wins and loses. He was well schooled. But it’s way more than Os and Xs to be a successful coach.

“He develops great relationships with players. He knows how to walk the line between demanding discipline and letting them know he cares about them. To develop those relationships so there’s a player-coach trust is the whole key. I always feel like players have great B.S. antennae. If they don’t trust or they think you’re blowing smoke, it’s over quick. He’s the opposite of that. He’s one of the best.” 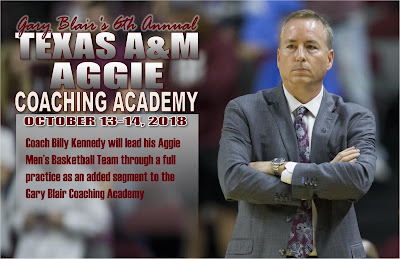 Today we are excited to add two new segments to this year’s Gary Blair Coaching Academy.  Billy Kennedy and his Texas A&M men’s basketball team will conduct a full practice as part of the Academy schedule.  Since taking the reins of the program, Coach Kennedy has guided Texas A&M to an SEC title and three trips to the postseason, highlighted by a run to the 2016 Sweet 16 which matched the school’s deepest run in the NCAA Tournament.

Also, on Saturday morning at 11:00 AM, the Aggie Women’s Basketball Team will have a Defensive Practice.  While not part of the Academy, coaches that get into town early are welcome to attend.

A reminder that the Academy also includes:
◄4 Complete Clinic Sessions featuring the entire Aggie Basketball staff and team.
◄Two sessions with Hall of Famer Gary Blair
◄Guest speakers Brendan Suhr and Jim Boone
◄Breakfast and Lunch (Dinner will be on your own)
◄Jump Drive that will include:
•Segments from the Academy
•Aggie Defensive Drill Notebook
•Aggie Offensive Playbook
•Clinic Notes & Book Notes
•And much more! 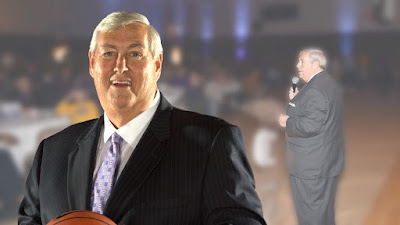 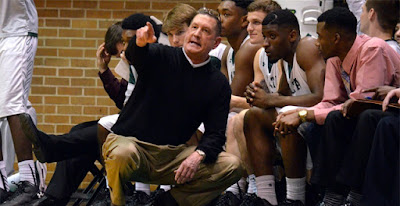 For those coaches wanting to pay by credit card, simply click on this link:
tinyurl.com/y8bb3a7p

Coach may also pay at the door though we request you email Coach Starkey at rstarkey@athletics.tamu.edu to reserve your spot.

Or use the form below to write a check and mail it in: 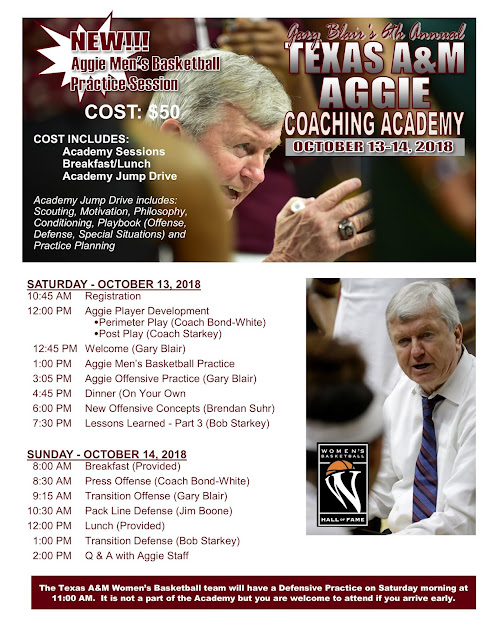 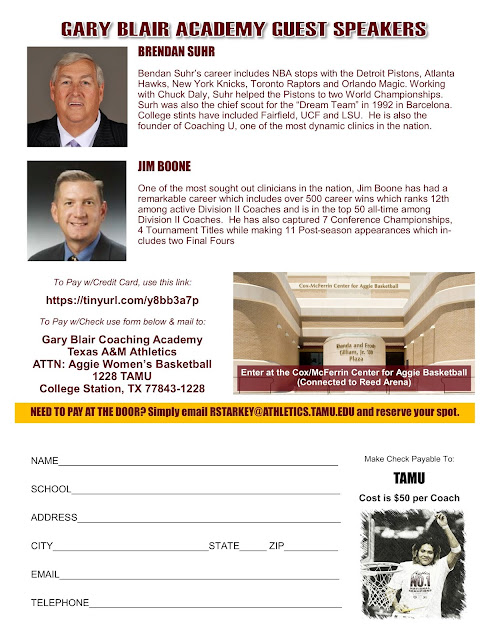 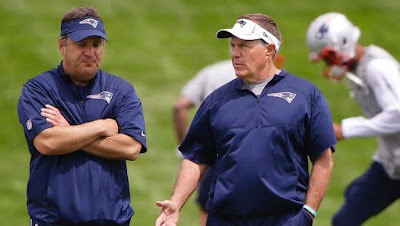 Here's a great passage on how much Bill Belichick values communication via "Gridiron Genius" by Michael Lombardi:

Once in New England, Belichick ripped all the numbers off the preseason practice jerseys. Everyone thought it was intended to confuse the media and other onlookers, but really it was to force the Patriots defenders to learn one another’s names and get used to talking during the play. Belichick always said that if you want to know how well a defense is working, just listen. Defenses succeed only if the players know the scheme. But they really thrive when the players are talking to one another on the field.