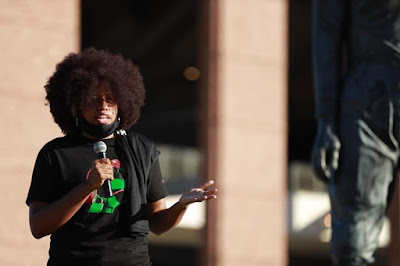 The following is the address given by Ciera Johnson at the Unity March for Black Lives Matter on the campus at Texas A&M, Thursday, June 11.  The event was sponsored by the A&M Student-Athlete Advisory Committee.  Ciera is a senior captain for the Aggie women's basketball team:

Howdy! I want to start off by saying thank you all for coming out and thank you to the group of people that put this together.

Over the past few weeks I have been trying to process everything that has been going on. One thing I can conclude is that the level of ignorance and disrespect towards my people throughout this country is ridiculous.

I would like for everyone to close their eyes as I make these statements:

Imagine a teacher giving you a nickname because they're too lazy to pronounce or learn your ethnic name.

Imagine your hair being a factor in whether or not you get a job.

Imagine your skin being viewed as a weapon but every summer people can’t wait to tan and get darker.

Imagine parts of culture being viewed as ghetto or hood, but the moment the Kardashians endorse it, it becomes hip.

Imagine going anywhere in the world and people already hate you because of the color of your skin.

Imagine everything you built being taken from you...Tulsa, Rosewood.

Imagine being admired on game day, but being feared the moment the game is over.

And lastly, Imagine a police officer has his knee on the neck of your father for over eight minutes and your father yelling “I can’t breath,” while being suffocated to death.

You may open your eyes.

The death of George Floyd didn’t ignite a new movement. It just brought light to a fight that has been going on for a very long time. People like Nat Turner, Harriet Tubman, Angela Davis, Medgar Evers, James Baldwin, and others have been fighting for our humanity, justice, and equality. We must continue the fight that was started over hundreds of years ago. This is our chance to make a difference and stand for something bigger than ourselves and sport. We all have a voice and our voices must be heard. We are the future and what we do now will impact the lives of generations to come.

I want to end with these two quotes:

Former Supreme Court Justice, Thurgood Marshall said, “Racism separates, but it never liberates. Hatred generates fear, and fear once given a foothold binds, consumes and imprisons. Nothing is gained from prejudice. No one benefits from racism.”

Civil Rights Activist, Angela Davis said, “You have to act as if it were possible to radically transform the world. And do it all the time.” 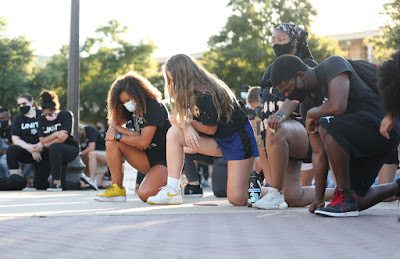