TEACHING PLAYERS TO FIGURE IT OUT FOR THEMSELVES 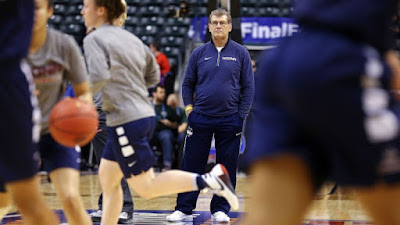 It's been a while back, but I posted briefly about a concept that I hold dear to my coaching philosophy -- the ability to teach your players to figure things out on their own.

There are three things that I think coaches should stress, teach and demand on a daily basis regardless of what their philosophy is in regard to X & Os, discipline and team building.  I believe you should be teaching players to Talk, to be Tough, and to Think.  Figuring things out is a major component to thinking.


One of the most underrated things that the best coaches teach, in any sport on any level, is that of educating their players how to think on their own.  Few were better than Coach Newell.

“I wanted players with initiative, guys who could control a difficult situation on their own.  People may not realize that years ago, you couldn’t bring a player over to the sideline to talk to him.  Players had to stand out in the middle of the court during your timeout.  They changed that rule during my second year in coaching (1947) and I was madder than hell.  I felt my team could always interpret what I was teaching; we didn’t need all these damn meetings.  I didn’t want my players depending on me.  I figured I’d teach ‘em during the week, and when the game comes along, it’s up to them.  That’s one reason I didn’t like to call timeouts.  I didn’t want the players thinking that every time they got in a little jam, I’d bail them out.  I wanted to make them figure it out.”

Not surprisingly an article on Geno Auriemma written by Paul Doyle of the Hartford Currant points the same feature out in the UConn coach:

It goes back to the practices. Yes, Auriemma and Dailey recruit mentally tough players. But Auriemma challenges them every day. He'll run "break the press" drills with six practice players facing his players and tell them to figure it out.

"He just tests your will, he tests your mind and your heart, every day in practice," Lobo said. "So you are prepared in moments to be able to make those shots because you've been in mentally challenging situations before."

LaChina Robinson noted: "When you talk to Sue [Bird] and Swin [Cash] and those guys, obviously they played on great teams, but they talk about how he would put them in situations where it was almost impossible to succeed. Every day in practice. So he made it impossible so that in the games it would be easy."