INSIGHT INTO BEING A GREAT TEAMMATE 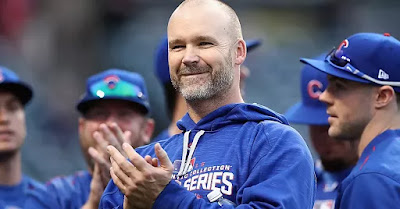 I've just finished read "Teammate" by David Ross and my friend Don Yaeger.  I've spoke to my friends who love baseball and they love this book -- with good reason.  You get a great insight into the career of Ross but more importantly a peak in the dugout and clubhouse of the Chicago Cubs World Series run.

For me, I was fascinated with the title of the book and some of the thoughts regarding being a good teammate.

This first pass is one that I will be sharing with our Aggie Leadership Council -- the art of being aware.  Having a pulse for your team to help often solve problems before they become problems:

I think good teammates have a high level of self-awareness. If you are self-aware, you have a better chance of focusing on the moment, you have a better chance of processing information. If you know yourself and are able to make adjustments, you will improve as a player, or have the potential to help those around you improve, because you understand the. Self-awareness is tied to authenticity. People who lack self-awareness tend to be more narcissistic because they can’t truly read themselves.

The next point is often lost an players and even coaches.  Just because you not in the lineup doesn't mean you responsibilities of being a good teammate are minimized in any capacity. In fact, that when they grow in importance.  The player who is a great teammate when he's not on the field or the court is the best kind of teammate:

Whether I was scheduled to play on a given day or not, I always tried to bring my personality and my energy to the ballpark. That was a very important part of being a good teammate to me. If I didn’t have my energy that day, it was difficult to invest in the team. If I was dragging or not into that day, I hurt the team And my teammates expected it of me. As a veteran if I was not checked in at all times, it took away from my credibility. It would be hard to criticize a teammate and be respected. I think that’s important from a manager and as a professional baseball player—you’ve got to be the same guy every day. Everyone has good and bad days and mood swings. I did too. But I tried to be the same guy every day that I went to the field.

And again, teammates aren't great because they have an amazing stat line.  As Ross says below, it's not "about numbers."

Being a good teammate and leader, in the long run, wasn’t about numbers. It was about presence and how you were perceived by the rest of the group. That’s what mattered most. Talent is part of the equation, but when you combine talent with accountability and authenticity, it is tough to beat.

A lot more to this book on Ross' thought of being a great teammate and how he actually grew into that role.