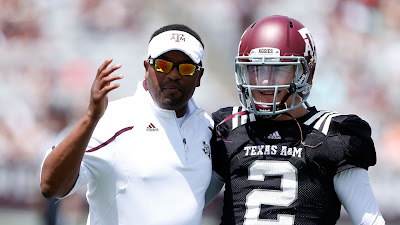 Here are some excerpts from an article by Dan Wetzel at sports.Yahoo.com (you can read the entire article here).  It's a look at our football coach at Texas A&M Kevin Sumlin.  The first set of excerpts talks to the fact of the various problems Coach Sumlin faced.  Coaching is about solving problems -- end of discussion.  But sometimes we look up and we see a Coach Sumlin lifting an Aggie football program to great heights and thinking "Wow, he got the job at the right time."  But in reality he did a great job of solving problems:

Sumlin took over here in 2012 after a successful run at Houston only to be met with the crushing reality of how the Aggie program was perceived on the recruiting trail.


"There were three real issues you were fighting," Sumlin said. "You had a coaching staff that showed up from a non-BCS program, so you're dealing with that. You're dealing with the perception in recruiting that the type of offense that we run was not conducive to national award winners or the ability to play pro. All of that while transitioning into the toughest league in the country from a program that had been .500 for the last 10 years.

"[Rival coaches told recruits] all the time, 'You're going to get your brains beat out. Why are you going to go there, it's not going to work.' "


It hit home when in Sumlin's first couple weeks he made two recruiting pitches to players in Houston that he thought would believe in A&M and its fresh new coach.

"One was a kid whose dad played here and one was a kid who's younger brother played baseball with my son," Sumlin said. "I knew them. I knew the moms. And their exact words were, 'We're going to wait and see.' And over time those other programs couldn't wait [and offered the players scholarships]. So they went there. We're going to play against them.

"So you've got a guy who went to school here and lived by me in Houston and didn't send his son here. And you've got a family that I know personally and they know me, we're right here, and they're not coming.


Eleven wins, including one at Alabama and a blowout of Oklahoma in the Cotton Bowl, a Heisman (Manziel), an Outland Trophy (Luke Joeckel), and a No. 2 pick (Joeckel) in the NFL draft later, how often are the three "issues" coming up now?

"Not often," Sumlin said, and there again is the laugh.

This last excerpt talks about Coach Johnny Manziel.  Coach Sumlin has done a great job of navigating through the waters of a first-time ever Heisman Trophy winner in a new unchartered era of social media.  I love the fact that he holds him accountable but also understands that growth is both possible and necessary.  Again, many would think Coach Sumlin fortunate for having a Manziel but I would lean the other way in that Manziel picked the right school and program for what he wanted to accomplish and what he would have to go through:

Front and center on that idea, it would seem, is Manziel. Is Johnny Football easy or difficult to coach?


"Everybody who talks to him knows that he's serious about things," Sumlin said, noting Manziel is back on campus for summer school and spent most of his time training this offseason. "And anybody who hears him talk knows that. I know, he's made plenty of mistakes, but he's young. That's part of growing up and getting there. It's never been done in college football, a freshman winning the Heisman.

"I was at the Heisman deal, in the back room, there were a lot of guys who said, 'Boy, I'm glad we didn't have [the internet] when I played.' There'd be a much different perspective of a lot of guys.

"But that's all part of it. That comes with the responsibility. We all know we did things at 19 and 20 that we'd like to take back and we wouldn't do again."

Except the part about beating 'Bama, of course.
Posted by BOB STARKEY at 9:48 AM