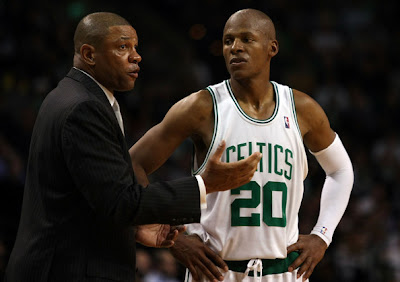 A special thanks to my friend Joey Burton (Mississip State) for passing along this article about Ray Allen written by Scott Souza -- a great one to pass on to your players!

For five months Celtics coach Doc Rivers had no contact with his team during the NBA lockout. He didn’t know who half of his players would be this season, never mind whether they were eating right, getting their shots up or hitting the weight room.

Because of that, the coach had a lot to worry about when training camp opened just two weeks before the first game of the year. One person Rivers didn’t have to worry about was Ray Allen. That’s because Rivers knew Allen had spent the entire summer worrying about himself being ready to go the minute the doors were unlocked on the new season.

"That’s like the sun setting," Rivers said. "I would put him up against anyone in the league with his conditioning. I don’t know how he does it."

He does it because he always has. Allen admitted at times this summer he had to fight the urge to take a break when it became apparent the season would not start on time, or say "Why bother?" when pessimism reigned over whether there would be a season at all.

But something inside wouldn’t let him do it. Something kept pushing him to the gym, to the golf course, to the streets around his Wellesley home to run — anything to keep his body working at age 36 as close as possible to the way it did when he was 26.

"There were those mental tugs of war that I had with myself," he said following Friday night’s home opener. "You know what you get bad news – the season’s not going to start. You kind of, in your mind, say that, well, I’ll just kind of lay back a little bit more.

"But my lifestyle, what I try to create, is a habit of just always working out. It’s just part of my daily life. If I weren’t playing basketball, I would go out and do something just to make my body better on that particular day. I tried not to equate what was going on (in the lockout) to that. I just said to myself: ‘Take care of your body.’"

And because of that his body has taken care of him after the five-month layoff. 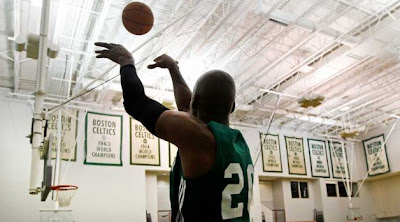 He has made all 16 of his free throws.

If it’s possible to have actually gotten younger during the lockout, Allen might have just figured out how.

"He’s a great example for young kids because he’ll do what he wants to do, but he is still going to the gym," Rivers said. "He’ll play 36 (minutes the night before) and he’s still going to the gym because he knows at the end of the day that’s his job. With a lot of the younger guys, if they did that they’d take the day off because they’re tired. But Ray just doesn’t do that. That’s who he is."

Allen has spent his 16-year career trying to perfect who he is and avoid becoming who he does not want to be. He was there during the last NBA lockout 13 years ago and saw players around the league come in overweight, out of shape and watched them become poster children for the perception of fat, lazy, millionaire athletes who lacked discipline and pride.

That wasn’t going to be him this time.

"I’ve been the type throughout my whole career to watch everything everybody’s always done," he said. "As bad as this is to say, I’ve always appreciated when someone’s done something bad around me because it’s helped me. Whether it’s someone in my locker room, or someone in public, someone around the world, it helps you live your life a little bit better because you know the mistakes not to make. Obviously, when you see the good things people do you incorporate that into your life too.

"When I went through this back in ’99, I saw all the guys who came in out of shape. That’s all I thought about when I worked out. Don’t be that guy. You’re one of the older guys, so if you come back in and you’re not in shape they are going to expect that from you. I wanted to be on the other side."

So he has been. Through four games, at least, he’s looked in midseason form while those around him continue to shake off rust and overcome nagging injuries. He’s looked every bit the player he did when he came to the Celtics five seasons ago, and has looked like a player who could still be suiting up in the NBA three, four, five seasons down the road.

"Working out-wise, I know nobody else did what I did," he said. "It’s pushing yourself. If I’m not playing, I’m still working out. When it was November, I was thinking that we would be playing typically. So instead of me sitting at home, I was thinking that I should be in the gym every day."
Posted by BOB STARKEY at 5:54 AM