THE PROCESS OF MOVING FORWARD PAST CHAMPIONSHIPS 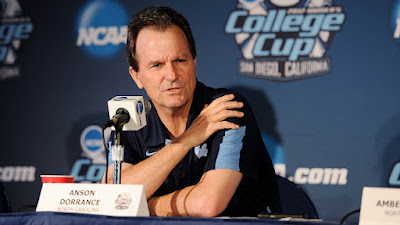 We have spent plenty of time over the years blogging about coaching, playing & competing in the moment.  Coach Nick Saban refers to it as the process -- understanding that the only thing you can control is your effort on the very next possession. Coach Don Meyer refers to the concept as an "NBA Player" with NBA standing for Next Best Action.  Whether you've made a great play or mistake, you have no time or effort that you can expend thinking about it -- you must be on to the next action.

I once heard an interview with Coach Mike Krzyzewski in which he was asked about the challenge of "repeating" as a National Champion.  He simply said "repeating" wasn't part of the Duke equation.  He explained that repeating was impossible because each season is a different journey with a different team, different opponents, different adversities.

More on Coach K's views on "defending a championship" can be found in the book "Toughness" written by Jay Bilas:


Krzyzewski would have none of it. Nobody outside his team defined his players or his team, defined its mission or framed its journey. Only Krzyzewski and his team did that.  In the very first team meeting before the start of the season, Krzyzewski told the team he didn’t want to hear anyone use the term “defending” national champions. “We aren’t defending anything,” Krzyzewski said. “That trophy has already been won, and is displayed out in the lobby of Cameron. It doesn’t need to be defended.  “We are pursuing this championship. We are not defending. We are pursuing. That is the job at hand.”

In fact, the best coaches rarely speak about destination goals or spend anytime talking about past seasons.  Bill Belichick says "To live in the past is to die in the present."

Belichick also has spoke of the balance of motivating teams coming off championship runs saying, "You'll tiptoe on the line between helping your players forget that they're the champions and helping them remember why they're champions."

Quite simply, the best know how to move it forward.

I recently read a great example of this in "What Drives Winning" by Brett Ledbetter who shared a story he got from North Carolina's Anson Dorrance whose Tar Heels have won 21 National Championship.  Here is what Dorrance revealed to Ledbetter:

Anson Dorrance gives his soccer players at the University of North Carolina roses after they win a national championship. He’s won over twenty of them as a head coach. I asked him why he did that. He told me, “I’m not really big on championship rings or trophies. I prefer flowers. The reason I give them a rose is because it’s ephemeral—the rose dies and it dies relatively quickly.”