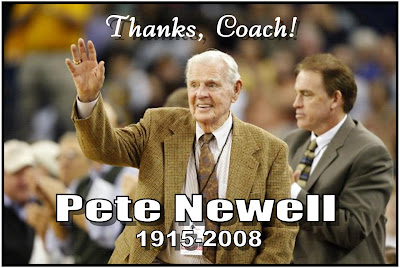 "The success of basketball teams normally
depends upon their mastery of fundamentals of
play. While the coach associates sound fundamentals with team success, he realizes that a sound and definite philosophy is synonymous with good coaching. A coach's philosophy is the foundation upon which he predicates his success."
from "Basketball Methods"
By Pete Newell and John Benington, 1962

The following Coach Newell quotes come on a variety of subjects from "A Good Man: The Pete Newell Story" by Bruce Jenkins.
On defense: "You start with the fact that there's only one way to play defense. Shuffle your feet, knees bent, hands up."
On developing habits: "I believe you can never change a habit, or create one, with a word or a piece of chalk. You can talk all day, put all sorts of diagrams on the board, but a habit is not going to change. It's a conditional reflex, created by a repetitive act."
On morale: "Morale is something a lot of people talk about, but seldom really address. You've got to practice it, show that you're committed."
On part-method teaching: "Part-method teaching tells a kid why he's doing something. In five-on-five drills you're not teaching, you're coaching. Break it down to one-on-one, two-on-two, three-on-three, go through every option of the offense and defense, and the players will understand why you're doing it. And if they make mistakes, you can point it out. The parts make the whole. It's like your car engine; you work on the sparkplugs or the carburetor or whatever's causing the problem. You don't have to get rid of the whole motor."
On tempo: "We want to make the other team play a game we think we can play better. We do this by making them play at a speed they're not used to."
On emphasizing defense: "Everything to me is calculated toward the defense and letting the players know they can assert themsevles."
On reverse-action offense: "A really sound offense will have that variety. With reverse action, we'd have a screener, a cutter, and a passer, and if you have the three minds working together at the same time, you'd get a real good shot."
On criticizing players: "I never berated a player coming off the court or on the bench. I may have raised hell on the practice court, or watching films the next day, and sometimes it was my fault. But I wasn't involved in blaming people. It was why, why, why. Because when you know the 'why' of something, you can do something about it."
On coaching & teaching: "Coaching and teaching are two different things. The coaching never turned me on that much, but I always enjoyed the teaching, the practice sessions."
On little things: "It's little things. Like coming to a jump-stop when you catch the ball inside in post-up position, so now either foot can be a pivot."
Probably no story summed up Pete Newell more than the one Coach Bob Knight shared in his book, "Knight: My Story" when to told of Coach Newell taking the time to visit with Coach Fred Taylor to discuss defense. Coach Taylor was the at Ohio State, with a young Bob Knight on the team. Coach Newell openly shared his defensive philosophy with the Ohio State staff. In 1960 Ohio State defeated Coach Newell's California team in the NCAA championship game and it had a profound effect on Coach Knight:
"What he represented to me in this case was the responsibility a teacher has to share with others whatever he has come up with that he found to be of some benefit. When later I was in a position to do that, I always did. If we were doing something that people were interested in, I never held anything back at clinics or in conversation with fellow coaches, especially young ones."
This has had a domino impact on many of us in the coaching profession. I have attended Coach Kngiht's practices at Indiana -- they were always open to coaches -- as well as attend his clinics. When you think of Pete Newell, Bob Knight and Don Meyer, you think of not just great coaches but people who care enough about the game and those of us who coach it, to want to share their knowledge. It is a major premise behind the creation of this blog.
Below is a link to an ESPN video with Coach Knight talking about Coach Newell:
http://sports.espn.go.com/broadband/video/videopage?videoId=3709407&categoryId=2459792
Posted by BOB STARKEY at 7:29 PM