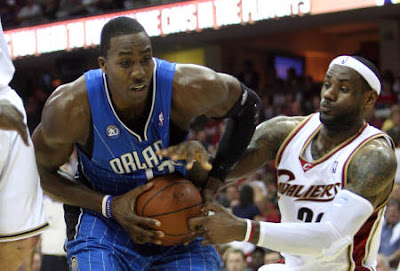 The following comes from Brian McCoromick's most recent newsletter and is great advice for post players on all levels:

Just as I think guards spend too much time practicing various dribble moves in straight lines when 90% of the time, a good guard uses a hesitation or front crossover in most situations, posts tend to practice too many different moves. A post like Dwight Howard should have a go-to move to each shoulder and a counter to each move. Right now (and for young post players), that is all he should use. As he masters those moves against defenders (not in 1v0 practice), then he can add some variety for use against the tougher defenders or for seven-game series when the same defender sees the same move and counter over and over.

To be effective, however, I would advise three things:
1. Limit your moves.
2. Play the game much lower and with more emphasis on the lower body to create space rather than relying on his massive shoulders.
3. More practice against live defenders (let Gortat earn his money) and more visualization or video work in pre-game 1v0 settings when the risk of injury prevents 1v1 practice.
The off-season is the time for the development of new skills. Pre-game situations are for refining learned skills and preparing for competition.
Posted by BOB STARKEY at 4:48 AM