RIPKEN DIDN'T SHOW UP FOR WORK -- HE SHOWED UP TO WORK 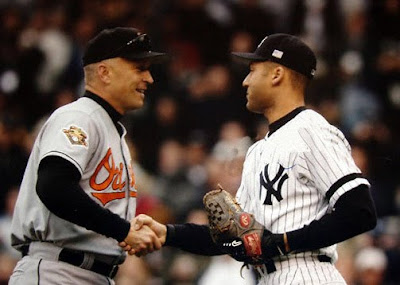 I was organizing some things in my office (still actually unpacking some boxes from my last move) and came across some articles that I had printed off the computer to save and study.  One was on Cal Ripken, written by my friend Don Yaeger.  The message of the story will be obvious but is necessary to repeat -- especially for the modern day athletes.  But I thought there was a secondary story to it as well.  See if you can pick up on it and I tell you what I saw at the end.


"Setting an example is not the main means
of influencing others, it is the only means."
-Albert Einstein

If Albert Einstein was right, Cal Ripken should have been a CEO or politician rather than a shortstop, because Ripken led by example over and over...and over again.

In the preface to his 2007 book "Get in the Game," Ripken tells about a conversation in the dugout during the 1998 All-Star Game.  Derek Jeter, now a perennial all-star for the New York Yankees, was playing in his first midsummer classic.  He leaned in to ask Ripken, "What's the secret of playing every day?  How do you do it?"

Ripken's answer to young Jeter was the same then as it has been for the last 11 years.  "You know Derek, I just...I just play."

As unspectacular as the answer might seem, Ripken says he's grown to realize he has to amend it a little.  "I didn't just show up for work, as has sometimes been said.  I also showed up to work."

The distinction, Ripken says, sitting in the offices of his baseball complex outside of Baltimore, is that he didn't just clock in; he made sure he was getting better at his craft every day.  And that is tough to do over two decades in any job.

"I think the numbers will back me up," Ripken says.  "I worked at my game, worked on my weaknesses.  I wanted to make sure that I wasn't just on the field, but that I was a contributor every time I was out there."

Secondary Story: I really loved the fact that Derek Jeter went over to Ripken to pick his brain.  It was his first all-start game and he could've played it cool but he was there with the game's best and wanting to learn and grow -- which is exactly what he's done!
Posted by BOB STARKEY at 7:00 AM