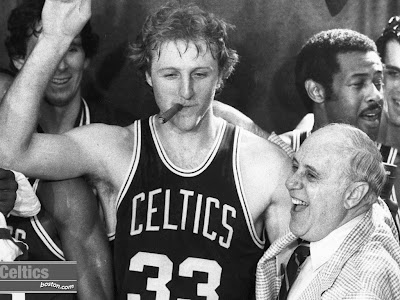 While playing for the Celtics, Larry Bird's daily program included a long-distance run, practice games with teammates, multiple sit-ups, and short-distance runs all sandwiched between lengthy shooting drills. No wonder he was such a superb fourth-quarter player -- he was in better shape than anyone else.


More than 15 years later, Bird astounded many of the Pacers players by running a mile in 5:20. That achievement set the tone for the conditioning program the team endured over the summer as they approached training camp.


Veterans and rookies alike knew Bird had been obsessed with practice when he was with the Celtics, often showing up hours early so he could work on every face of his game. Other NBA coaches had used Bird as an example of a superb work ethics. One brought his team to Boston Garden early to see number 33 in action. To his amazement, Larry wasn't on the court. Embarrassed, the coach headed for the sidelines before looking up to see Bird running on the track. He was working on his conditioning that day.


As well as his shooting. While most players waltzed into the locker room the required 90 minutes before game time, Bird has been on the floor by at least 6:00, more than two hours before tip-off. In the loneliness of Boston Garden, with only attendants and a few Celtics season ticket holders present, Bird shot more than 300 practice shots. He'd start with 6 to 10 free throws, move out on the court a bit, and then start firing away at a comfortable pace as comrade Joe Qatato hit him with perfect passes. Then the "Parquet Picasso," as he was dubbed, would speed up the routine and by the end of the workout throw up rapid-fire shots, many featuring the Bird "drop back a step" maneuver that guaranteed him an opening from every angle. "I really don't count my shots," Bird said. "I just shoot until I feel good."


ESPN producer Bill Fairweather recalled Bird amazing even the great Micky Mantle. "We had Mantle in the studio when I worked at WBZ in Boston, and the in-house camera feed showed Bird practicing at the Garden. It was like 4:00 and nobody was there but the maintenance people and a few ushers. Here's Bird out there shooting jumpers, one after another. Mantle watched for awhile, and then said, 'This guy hasn't missed a shot since I got here.' I could tell the Mick was in awe of Bird.


The shooting practice was reflective of Bird's desire and his love for the game. "That's the number one thing, the desire," he explained. "The ability to do the things you have to do to become a basketball player. I don't think you can teach desire. I don't know why I have it, but I do."


From "Larry Legend" by Mark Shaw
Posted by BOB STARKEY at 5:14 AM