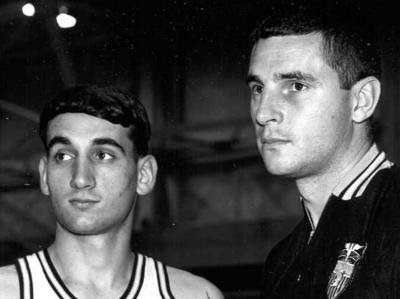 Came across an article from 2006 from the Harvard Business School discussing the leadership styles of Coach Bob Knight and Coach Mike Krzyzewski. It's a facsinating read:
What you believe about human nature, says Snook, influences your leadership style. "If you believe people are fundamentally good—good meaning that they're trying to do their best, they're self-motivated, they want to perform—then your fundamental leadership style will be one way. It will be empowering them, getting obstacles out of the way, and setting high goals while maintaining standards.
"If you believe people are fundamentally bad—if you believe people are constantly looking to get over and get by and won't do anything unless they're watched—then you'll tend to lead with a very transactional management style that's built primarily around rewards and punishments. Tight supervision, a controlling type of leadership style characterized by a great deal of social distance between leaders and led."
Soon, Snook's students are reflecting on their own beliefs about human nature and leadership.
And they are also contemplating this question: Knight or Krzyzewski, whom would you hire?
While the deck seems stacked in favor of Coach K, at least under today's standards of behavior, some interesting perspectives come forth in the classroom. The class learns that many of Knight's former players love the man like a father, and that students demonstrated en masse at Indiana when Knight was fired. When asked how Knight and Krzyzewski are alike, students say that both are passionate, disciplined, technically competent, and deeply care for their players beyond the basketball court.
Feelings about Knight also follow generational lines. While younger students often see Knight as little more than a bully, older participants tell stories of doing their best work under a mentor with Coach Knight's tough-love approach. Some also recall their experiences as managers when a stern approach helped set an employee on a more productive course.
Soon, many students are rethinking their position. "The ones that say they couldn't imagine learning from someone like a Coach Knight, they hear these stories and start questioning, 'Well, maybe there is another way of thinking about leading,'" Snook says. "And that's what you want to do, to get people to broaden the stylistic repertoire not only of themselves, but to consider that there are alternative ways of influencing people, and that different people respond to different styles."
Sure, Knight's older-generation, throw-the-chair leadership style has gone out of favor, but a disciplined, top-down approach can still be effective in particular situations. Some employees work better when structure is imposed on them, Snook observes. "It's the understanding that 'I work better, I will perform better, I'll make more money if somebody gives me a pay-per-perform'" work environment, says Snook. Others crave autonomy or teamwork.
"The ultimate lesson is, what kind of person am I, and then what are the implications of my underlying assumptions for how I lead, and the kind of organizations and the type of situations I'm more effective in? It's not like one's better, one's worse."
Read the entire article here:
http://hbswk.hbs.edu/item/5464.html
Posted by BOB STARKEY at 8:48 AM