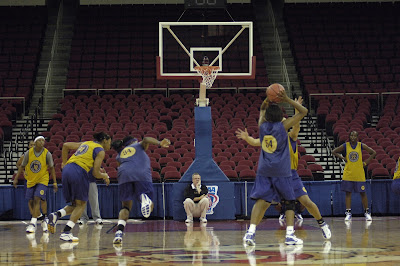 Motion Offense is predicated on both player and ball movement as well as a player’s ability to read the defense. A player and team must be able to take advantage of those opportunities presented to them by the defense as opposed to relying on a predetermined sequence of movement.

Keeping that particular definition in mind, we will take a look at the advantages of running motion offense. Within those advantages we will review practical applications and consider disadvantages as well.

Difficult To Defend
For the obvious reason that motion offense is not patterned and is based on the player’s ability to read the defense, it is difficult to defend. Should the defense be geared to take away one thing, the proper read by the offense will open up another available option.
Application: Many plays or patterned offenses are set up with a particular pass to enter the ball. Should the defense be successful in defending that pass, it takes a great deal away from the offense. Granted, even set plays have counters, but it still is disruptive to
the offense and the main emphasis of attack.

Tough For An Opponent To Scout
Again, because it is an offense based on principles and determined by reads, it can be tough to scout. Depending upon your utilization of motion and the rest of your offensive system, it can nearly be impossible to scout in terms of team offense. An opponent must rely on scouting individual tendencies.
Application: Because continuity offenses and set plays are patterned, a scout can write down the movement and work on it in practice. There are no predetermined movements in motion for a scout to show their team.

Teaches Players How To Play
Motion may sound wonderful to you at this point, but make no mistake -- it is probably the most difficult thing to teach a basketball team. You must teach players how to play without the basketball by using their eyes and “seeing” what is available. Motion is a high maintenance offense that takes time and effort to properly teach. Fundamentals must be taught at a premium. The ability to pass and catch the basketball is critical. Understanding of roles is another big step in executing properly. What all of this does is force a coaching staff to teach players to play. You must design practices to teach your team how to read as well as to make the proper decisions. For some coaches, that kind of responsibility can be frightening – for motion coaches, it is exciting – the ultimate in teaching.
Application: Motion offense, to be properly executed must be broken down daily in practice. The parts of the offense you teach include: passing, receiving, cutting, screening, dribbling, reading the defense, and shooting. It becomes even more specialized as you teach perimeter skills and post skills. These are all important fundamentals. You must teach them constantly in drill form as well as reinforce them in five-on-five situations. In this context, motion not only makes your players better offensively but it will also make you a better teacher.

Players Enjoy Running Motion
Without question, players enjoy the “freedom” that comes with motion offense. Nothing can be more frustrating to a player and/or team than to run a patterned offense and have a good defensive team alter their offense by defending a certain cut or pass. Often this can take a team directly out of their offense. With motion they know if they make the right read, that there is a fundamental option to use. They also know if they make the wrong decision, the offensive possession won’t necessarily fail – they can correct a mistake in the same possession without negatively affecting that particular offensive series.
Application: Ever have a team that runs their offense in the off-season when they are playing pick-up in the gym? Motion coaches do! Motion is nothing more than a “common sense offense.” Once your players learn to make reads it becomes natural to them and they will run motion even in the recreational center on the weekend. Ever have your players work on their offense in the off-season even when there isn’t enough for a full-court game? Motion coaches do! That’s because 3 on 3 and 4 on 4 are great ways to teach motion. Players enjoy (and run) motion year round – whether the coaches are there to supervise or not.

Makes Your Team Better Defensively
The fact that the offense is not predictable, means that your defense cannot “play the play” in practice. They must be alert to all cuts and screens at any time as presented by the offense. Again, this means you will improve defensively in terms of anticipation, each time your players step on a court and play against each other – even in the off-season.
Application: The perfect example in improving your defense is to understand that you have a great opportunity to work on your defense each time you work on your offense regardless of whether you are breaking down your offense or working in whole method.

Can Be Played At All Levels
Because motion if based on fundamentals, reading the defense, and teaching players “how to play,” it can be used on even the youngest levels. Motion can be as advanced as you need it to be but it can also be broken down into the simplest of forms. Dean Smith explained in his book how they put the passing game in at his camp on the first night.
Application: One of my first coaching jobs came on the middle school level (grades 6-8), where we were able to modify motion to an extremely simplistic form. That particular team had a post player that was tall and lanky. She was not very skilled but could rebound and score close to the goal. Her motion principle was this: “You are to stay on the block opposite the ball. When it is shot, work hard to rebound the basketball. If the ball comes to your side, slide to the other side and prepare to rebound.” Motion offense for that particular player was very effective for us. We had one exceptional offensive player on that team that could hit a perimeter shot or drive and create so we placed a restriction on that team that no one could shoot the ball from the perimeter until the outstanding player had gotten at least two touches. It was motion at its simplest form – and that’s exactly what a middle school team needed. Each day we taught them to pass, dribble, screen and cut. That team, the first in the school’s history started off 1-4 before finishing 9-7 and winning the county championship. It was very satisfying to watch these young girls, many playing basketball for the first time, learn the skills necessary within the team concept and improve throughout the season.

(Next: More advantages to running motion)
Posted by BOB STARKEY at 4:55 AM