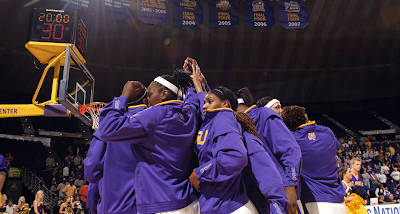 More advantages to utilizing motion offense:
Great Flexibility
Flexibility is an understatement. The way motion is designed; it can be adjusted from year to year, game-to-game, or substitution-to-substitution. It eliminates the need for a certain offense for certain line-ups. Motion can be an offense that attacks quickly or controls tempo. It can even be used as a delay game.
Application: The ultimate flexibility of motion comes from a simple substitution. With motion, you can send a shooting guard in to sub for a post player and simply adjust your motion alignment (we will give details later). Now your opponent is on the bench trying to change their match-ups. Another application came with our team at LSU from 1998 through 2000. We had two players of similar skill level and size in April Brown and Katrina Hibbert. While both are 5-10, they were effective in finding ways to score in the post. They were also skilled on the perimeter with 3-point shooting range. Because of our lack of size (our starting post player was 5-11), we played either April or Katrina at the other post position. How did we decide who was in the post and who was on the perimeter? We didn’t – we let our opponent’s decide. We told April and Katrina that whoever had the post player defending them would be on the perimeter. Consequently, whoever had the small forward defending them would slide in the post. Often, an opposing coach would see this and change defensive assignments only for April and Katrina to switch offensive positions the next time down the court. This type of flexibility helped us to take advantage of some mismatches even though we were the small team. The fact that we were smaller than practically every team on our schedule did not deny us post up opportunities thanks to the offensive flexibility. It is also important to understand that motion flexibility allows year-to-year adjustments. An example would be that you are big inside one year so you might rely heavily on Post Exchange and Triangle alignments to make the most of your size. Again we will detail alignment usage later. Following that season, let’s say your primary seniors are post players. Suddenly your team make-up has you becoming more of perimeter attacking team. During the next season, Regular (Single Post) might be more successful for you to use as your primary alignment. Remember, you are still utilizing the same motion offense principles of cutting and screening, but a different alignment to take advantage of your roster. In this scenario, you don’t create a different offense based upon your personnel.

Versatility In Attacking Multiple Defenses
Another major advantage of motion offense is that it can be applied against a variety of defenses. You won’t need a special offense to face the box-and-one defense and another to battle the triangle-and-two. At LSU, we utilize our motion offense to also attack zone defenses. White there are a few minor adjustments, it is still based on principles where we rely on our players to make the proper reads. We spend time in practice working against a variety of defenses so this helps. But, the key is that the offense can attack anything you come up against if you teach your players to make the proper reads and decisions.
Application: Despite our balanced scoring in the 1999-2000 season (four double figure scorers), we did face an occasional combination defense. Against a box-and-one, we ran our Post Exchange (3 perimeter players, 2 posts) and looked to attack the high post area and play off of that situation. During the 2005 SEC Tournament, Georgia threw out a triangle-and-two defense against us. They played the defense about 75% of the game but our team responded well. We simply ran our motion, worked the ball and got great shots. For the game, we shot 49.2% including 52% in the first half. The two players that were the focus of the triangle-and-two were still able to give us great offensive production. Seimone Augustus scored 22 points and Temeka Johnson pitched in with 11 points and 17 assists. A big key is that we don’t have to use our shooter that is facing the man-to-man coverage as a decoy. She still has the benefit of moving without the basketball and using screens to become open for shots. We talk to our screeners in these situations about playing as if they were facing a switching man-to-man defense and using those options (more on that later). Our execution helped us to score from a variety of ways from perimeter shots, to post feeds, to dribble penetration.

System Adaptability
Motion is adaptable to the remainder of your offensive system. If you run a primary break, you can get quickly into motion from the primary break. Should your program believe in the use of a secondary, you can get directly into motion regardless of what secondary you choose to run. Press offense? Doesn’t matter – you flow right into motion. Again, because motion has nothing predetermined, your players don’t have to line up at a certain spot to initiate your half court offense. The same holds true of your special situations. Regardless of what you do to enter the ball on the sideline or underneath your own goal, you can get directly into motion.
Application: The benefit of this is critical – especially on the collegiate level and even more so in the women’s game. Why? Because the women play with a 30 second shot clock. It takes valuable time to run your break, press offense or special situation and then back the ball out to “set up” your offense. Even more important to us, it allows us to continually be on the attack offensively. Whenever the offense takes times to “set up,” it allows the defense time to set up. Flowing directly into motion means hard screens and sharp cuts coupled with ball movement. Just when the defense thinks it can relax because it has successfully defended the break, you have quickly reversed the basketball, set a screen, made a read, and scored.

Singleness Of Purpose
This is the only offense that we need. That singleness of purpose allows us to give it the maximum amount of time in terms of teaching and emphasis each day. Just that fact alone means that you will do the necessary drill work to construct and perfect it each day which will greatly aid your team’s execution.
Application: Which offense is going to be better? The one you spend 20-30 minutes on each day of practice or a play that you spend 5-10 minutes on because you must spend an equal amount of time on the other four offenses you run against man-to-man defenses.

Utilization Of Strengths & Weaknesses
All basketball teams have certain strengths and weaknesses, but even more importantly, all basketball players have strengths and weaknesses. Those traits, both positive and negative can disrupt the execution of an offense. With motion offense, you can define each player’s offensive responsibilities to fit what they can and cannot do. A continuity offense will often still have players that cannot handle the ball popping out to catch and pass. Non-shooters will sometimes have possession of the basketball on the perimeter. A good defensive team that does a good job of scouting and preparing can manipulate all of these situations. With motion, you can place players in situations that best take advantage of what they are capable of doing. A poorly skilled player can be extremely important in motion if they can read the defense and screen properly.
Application: For instance, you have a post player that isn’t a very effective scorer. This player is a prime candidate to be a primary screener – and these types of players are very important for offensive success. To take it a step further, lets compare two players at the same position with different skills. On our team in 1999-2000, we had April Brown who played some post for us along with DeTrina White who was a post as well. April has the ability to shoot the perimeter shot very well while DeTrina was strictly a low post scoring threat. One of our primary screens is the back screen. We told DeTrina that when she sets a back screen, we wanted her to follow the cutter and go back and re-screen. This is a great screen for a smart cutter. Of course, the re-screen was a great opportunity for DeTrina to seal the defender, get a piece of the paint, and get a possible low post touch. April, on the other hand, had the option of the re-screen or following the back screen, she could widen out for possible shot (especially if her defender hung around in the lane to help on the cutter). Two post players, different strengths and weaknesses, same initial screen, but two different options to compliment what they can do best.

Player Development
Because of the amount of emphasis placed on players being able to fundamentally execute in the offense, a coaching staff has no choice but to develop each player in the various fundamental phases of the game. Your players must be well versed in their ability to dribble, pass and catch. Your post players must be schooled in the ability to flash, post, and seal. The biggest thing is that you must teach your players to “think.” This is not always necessary with a patterned offense – at least to the extent of motion. The result is a more rounded player.
Application: Where this comes into play is when your players have the opportunity to play at the next level. A player on any level that has been taught to move without the ball, set proper screens, and make good decisions with the ball is going to be a better player regardless of the system of play when they advance to a higher level of competition. I coached on the AAU level and used motion because I had players from several different high school systems and wanted them to all take advantage of what motion teaches when they returned back to their school for basketball season.

Enjoyable & Challenging To Coach
I suppose this may not be considered an advantage to those that are just beginning to teach motion. It can sometimes be a little frightening in terms of getting the system to work that first year. It is also scary with a young team. Still, for the coach that literally loves to “teach’ the game of basketball, nothing is more invigorating than implementing and developing a motion team.
Application: I once attended a clinic where Bob Knight made the following statement: “The most important thing a basketball player can have is an imagination.” I believe it is equally as important for today’s basketball coach. It may be related to how you run a program based on limited resources. It may take an imagination in terms of your budget, staff, or a wide variety of things that deal with leading an organization. But a good imagination is directly responsible for being a good motion coach. There is nothing more enjoyable to me than creating a new drill to develop an area of weakness for my team that I have been unable to do with the drills already being used. We have a large number of motion drills. We don’t use all of them in a week. Some we don’t even use at all during the course of a season – it depends on that team, the alignment, and what we are capable of doing. But each year there is something new that we create to build our motion offense. This is true of both individual drills as well as team drills. Each day that you sit down and design your practice it will be challenging to decide which drills to use that day to advance your overall execution.
(NEXT: Motion Offense Disadvantages)
Posted by BOB STARKEY at 4:51 AM