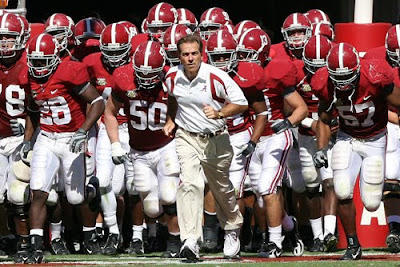 The following is a few excerpts of an article that ran on Coach Nick Saban in the Investor's Business Journal when he was coaching at LSU. It was written by Amy Alexander and we give the entire article to our team each fall:

It's Saturday night at Louisiana State University's Tiger Stadium, where everyone loves a winner. Except coach Nick Saban, who sometimes prefers losers.

That would be sacrilege in many locker rooms. Not in Saban's; he maintains that losers are more willing to polish their techniques, practice hard and do whatever it takes, even into the wee hours, to become the absolute best.

"When you lose, everybody's willing to think, 'What did I do wrong? What do I need to do better?'" Saban said during an interview in his Baton Rouge, La office. "I think the worst thing you can do is play poorly and still win."

Saban, 53, demands improvement from his players, even when they're top dog. Why? Because winning national championships isn't natural, he says. You must bend your entire life around becoming great, beating the urge to rest after you've achieved a little taste of success."

"You have to have a special commitment and willingness to do a lot of things that some aren't willing to do," Saban said.

When Saban arrived at LSU in November 1999, he concentrated on molding players' attitudes as much as on strengthening their muscles. At the time, many had gotten into what Saban calls, "catastrophe syndrome," giveing up when little things would go wrong.

To this day, Saban tells his players not to sneak even a single glance at the scoreboard while they're playing. How come?

"You want them to focus on the present moment," he said. "Whether you're ahead or behind should not affect how your participate in your next play."

In Spring of 2003, Saban laid out these five day-to-day goals for his players for the coming season:

1. Respect and trust your teammates
2. Have a positive impact on someone else
3. Dominate your opponent
4. Be responsible
5. Act like a champion

"Not a single one of the goals was to win the national championship," Saban said.

That might be an odd strategy. But Saban explains, success doesn't come from just pie-in-the-sky thinking. It's the result of consciously doing something each day that'll add to your overall excellence.

To get his players thinking about performing at their absolute best, individual best, Saban will often placer the locker room before games with gripping quotes. A favorite is from Martin Luther King, Jr.

It reflects Saban's method: "If you are called to be a street sweeper, sweep streets even as Michaelangelo painted or Beethoven composed music or Shakespeare wrote poetry. Sweep streets so well that all the hosts of heaven and earth will pause to say, 'Here lived a great street sweeper who did his job well.'"
Posted by BOB STARKEY at 9:20 AM