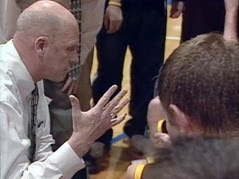 Here is a great post from Coach Don Meyer on the system he uses to evaluate his team's performance:

Tools that we use to determine how well or poorly our team actually played. Many times the scoreboard is a poor judge of your team’s performance.
...............
1. Turnover Margin: Looks to see if your team has “sureness” with the ball on offense and whether your team can create turnovers on defense. As the coach, you might have a goal of having a +5 margin, for instance, or you might set a mandatory goal of, for example, always having less than 10 turnovers and having a goal of forcing at least 15 turnovers.
2. Rebound Margin: Using a rebounding margin is a good barometer of how well you competed on the glass, and is probably better than measuring your rebounding effort with absolute numbers. For example, having a goal of out-rebounding your opponent by +10 is probably more realistic than saying that your goal is to get 50 total rebounds every game. Each game will have a varying number of rebounding opportunities due to the pace of the game, referees, etc.
.....................
3. Field Goal Attempts: If everything is equal, the team that gets the most and the best shots will win. Newell’s Rule = “Get better shots than your opponent and get more of those better shots.”
...........................
4. Field Goal %: Two rules that your program could live by are; your best shooter should have the most shots (shooting isn’t equal opportunity) and your worst shooter should have your best FG% (only takes lay-ups, wide open shots).
.....NSU Grading System:
..........4 = Wide open lay-up
..........3 = Wide open shot by good shooter
..........2 = Contested shot by good shooter
..........1 = Terrible shot
..........0 = Turnover
....................
5. Free Throw Attempts: The golden rule is to make more free throws than your opponent attempts.
6. Free Throw %: It’s one thing to get to the free throw line; it’s another thing to make your free throws. Great teams make their free throws.
7. No player scores more than 15 points: We like to use 15 points as a barometer to see if any one player really hurt our team. Most teams may have one or two stellar scorers that require special attention on defense and if our team can’t slow those players down, it will
be a long night. Holding great scorers under 15 points is a great measure of how well your team is playing team defense, because it’s very difficult, if not impossible, to stop a great scorer with one defender; help-side, rotations, and an overall effort by all five players on the floor is required.
8. 3-Point Game: Refers to both on offense and on defense. On offense, it’s simple enough – your team must make open 3’s. The players that are great 3-point shooters need to be the ones taking those shots. On defense, we always stress the concepts of “No 3’s to a 3” and the concept of a “Dead 3," who is a player that has at least 50% of his/her attempts from the three-point line. A Dead 3 gets no standing looks; he/she must dribble to a shot. Thus, how well did your team defend the 3-pointer? Also, how well did your team get your 3-point shooters open?
..............
9. Floor Game: The floor game encompasses a wide range of possibilities, including getting loose balls, taking charges, saving the ball from a turnover (saver-savee idea), etc. Your team could have a goal of taking a minimum of 2 charges, or getting 90% of all loose balls, etc.
...................
10. Assist Game: The assist game can mean many things. As a coach, you can look at your team’s assist: turnover ratio, possibly with a goal of 2 assists to 1 turnover (2:1). In addition, you can look at the assist to made basket %. Another, less subjective way of tracking assists would be to track how many “screen assists” your team has in a game; the number of times that a team member’s screen (possibly a back or flare screen) led to a wide open shot or lay-up.
Posted by BOB STARKEY at 7:31 AM