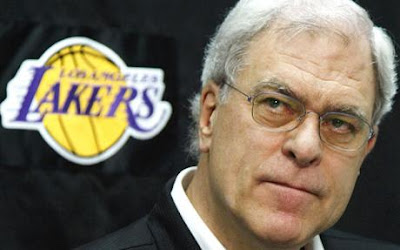 Greg Beacham, AP Sports Writer inks an article on the Los Angeles Lakers that displays a major reason they are a championship team -- late in the season and they are still driven to improve.

The Lakers then never even allowed the Utah Jazz to think they could play with the champs, dispatching them twice in emphatic fashion at Staples Center.

Coach Phil Jackson believes such playoff poise usually must be learned through tough experience. Bryant and Fisher are the Lakers' only holdovers from the championship teams in 2000-02, and Jackson doesn't need to ask either veteran to lead.

"They keep kind of an even keel for the rest of the players because of their experience," Jackson said. "Now Pau is at the point with the number of playoff games he's played that he's starting to show that, too."

Jackson isn't satisfied, either. His last two practices were particularly long and detailed, according to Ron Artest, who said the Lakers are working on the fine points of defensive communication to stick with Steve Nash and the Suns' sophisticated offense.

"We're still trying to get guys to find themselves and get immersed in what they have to do to play their best game," Jackson said. "We want that to be habitual. That fourth game of the Utah series, we want to count on that every night."
Read the entire article: http://bit.ly/bvzG71
Posted by BOB STARKEY at 5:59 PM