POSITION YOURSELF AS A VALUABLE PART OF THE PROGRAM 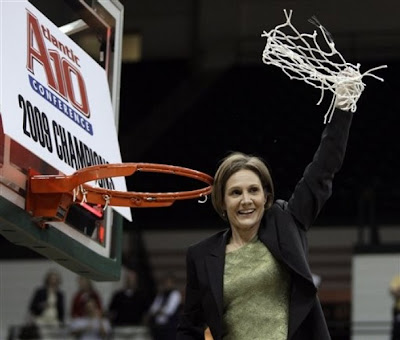 After coming back from the Assistant Coaching Professional Development Symposium I will from time to time share some of the things I learned. It was an amazing weekend. I was honored to be a presenter in two sessions but geniunely came back with more than I gave. Hats of to Felicia Hall Allen and her husband Johnny Allen for putting together something that help assistant coaches grow -- and in effect, help us grow the game!
The following comes from UNC-Charlotte head coach Karen Aston who was for years recognized as one of the nation's top assistant coaches. Her input I thought was invaluable because after being an assistant coach she is now a head coach and you could tell her her understanding from both sides as she spoke. Her topic was "Position Yourself As A Valuable Part of the Program."
.......................
Take Ownership and Initiative
1. Have options and ideas ready.
2. Be prepared in meetings and have a checklist of tasks. make sure you have checked them off.
3. Be embarrassed if your head coach has to continually check on you (phone calls, letters, emails, etc.)
4. Don't be the motivated -- be the motivator!
Be A Buffer
1. Be a buffer between the head and the players. Explain the coach's methods and teachings. Always, always, speak the same language as the head coach.
2. Talk to parents after games, etc.
3. Talk to fans, administration, etc. whenever possible. Be an advocate for the program and the head coach.
Study Basketball
1. Study film on your team and opponents.
2. Share with friends in the business who are from successful programs. Steal from them and share.
3. Know all answers about opponents and scouting. Be prepared when the head coach asks questions about an opponent.
Be In The Office and On The Court Before and After The Head Coach
1. Don't be the first one off the court after practice.
2. Spend outside time with players during the season. Head coaches want them in the gym and it gives players extra attention.
3. Don't let the head coach beat you to the office.
Posted by BOB STARKEY at 9:59 AM