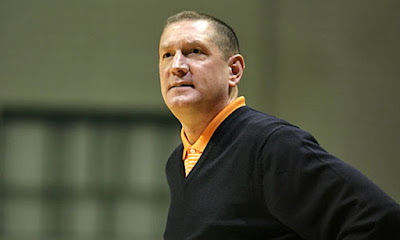 The following are Part II of my notes from Jim Boone's lecture on Pack Line Pressure Defense at last week's TABC Coaching Clinic in San Antonio.  Jim has been a life-long friend and a special member of my coaching circle.  He is absolutely one of the best teachers around and an excellent clinician.

1. Pressure on the Basketball (based on ability/athleticism)

Guarding non-ball defender
◄2 feet in Pack
◄Closer to the ball than your man
◄See ‘em both
TP: Defend with near arm, near leg (no open stance)

Tates Locke “Rule of Two”
◄2 minutes to Teach a Drill
◄2 days to Learn the Skill
◄2 months to make it a Habit.

JB doesn’t use a whistle in practice...wants player to be able to lock into his voice.

3. Can’t keep them from getting shots but can influence where those shots come from.

JB likes to “Red” the post — double big to big

All players are denied pass inside of 16’
JB: “We don’t get to the mid-line on help because we don’t deny.”

Side Ball Screen (Outer Third)
“Body Up” - make ball use screen
“Body In”
Screen Defender: Hand on hip
2 Steps Thru

JB: “If I was a high school coach I’d have an alternate defense for playing from behind.”