THE GREAT ONES ARE PROBLEM SOLVERS 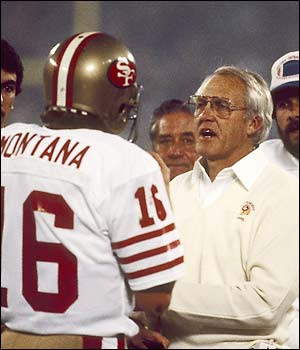 What Bill Walsh did bast to describe: (1) He could identify problems that needed to be solved; and (2) He could solve them.

Bill was smart enough, strong-willed enough, to get rid of talented people if they were contributors to a negative organizational culture – not team players. Those he allowed to remain he allowed to thrive – letting guys like Joe Montana and Ronnie Lott influence others in their own positive and individual ways without Bill telling them how they should do it.

What was so striking, especially in retrospect, was how he imagined and planned, and prepared everything. Everything. He had given every aspect of everything so much deep thought and careful planning. He had most of the answers, and what he didn’t know he quickly figured out.

Bill prized communication and understood that all the knowledge in the world meant little if you couldn’t communicate effectively. So, and this may be hard to believe, he had his coaches practice our coaching on one another. He knew you might be able to bullshit a player by blowing your whistle loudly, but you couldn’t bullshit another coach.

He brought in very good coaches and taught us how to be great coaches.

Bill forced us to think at a higher level, which was the starting point for getting players to play at a higher level and the organization to operate at a high level. That was his total focus, like an obsession. All he talked about was improvement. And he knew how to teach improvement.

From "The Score Takes Care of Itself" by Bill Walsh