MY CHALLENGE TO ALL COACHES TO SUPPORT KARA SUPPORTING COACH SUMMITT 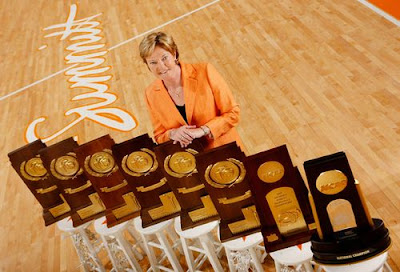 As someone who has been involved in coaching for over 30 years, I have had the opportunity to see first hand some of the very people who not only had a major impact on their own program but have changed the game nationally.  There are two that stand out in my mind this morning.  One is Coach Don Meyer and the other is Coach Pat Summitt.

Their tireless commitment to teaching the game a certain way -- to holding their players to a certain standard -- to sharing what they do with the masses -- has not only made their own programs special but has changed the game itself.

You see Coach Meyer and Coach Summitt have coached in such a way that their reach has gone beyond all boundaries.  I can say with certainty that the game of women's basketball has an incredible Hall of Fame located in Knoxville in large part because of Coach Summitt.  We have a professional league here in the United States and Coach Summitt is a major reason.  She has impacted our game from the very early youth levels through her camps all the way to the international level with her involvement with USA Basketball.  Women's Basketball being televised to the extent that it is now comes because of Coach Summitt and the national draw of the Lady Vols.

And now it's time to say thank you Coach Summitt!

I want to challenge every junior high, high school, junior college and collegiate team to help support Kara Lawson.  Kara was an All-American player for Coach Summitt and has since enjoyed a great career in the WNBA as well as a Gold Medal for our Olympic Team.

Now Kara and Damien Barling (Kara's husband) are running to raise awareness and funds for the fight against Alzheimer's in Coach Summitt's honor.  Kara is running a 5K while Damien will be participating in the New York City Marathon.

I want to challenge each school to make a donation to Kara in honor of Coach Summitt as a way of thanking her for all she has done for us and the game.  Each school can easily ask each player to contribute a dollar and make a $25 donation on Kara's site:  http://www.alznyc.org/karalawson/

STEP ONE
Please take the time to read about Kara Lawson, her relationship with Coach Summitt and how she is running a race to raise funds to fight Alzheimer's in honor of her coach.

STEP TWO
Share this information with your team.   It is a great opportunity to give them a little history lesson on Coach Summitt and what she has done for all of us.

STEP THREE
Ask each of your players to donate a dollar. Then please take the time to click on this link http://www.alznyc.org/karalawson/ and make a donation.

STEP FOUR
Forward this to other coaches you know and ask for their support. It would be an amazing way to help Kara pay tribute to her coach, show Coach Summitt how much we appreciate her, and help fight this terrible disease.
Posted by BOB STARKEY at 6:45 AM