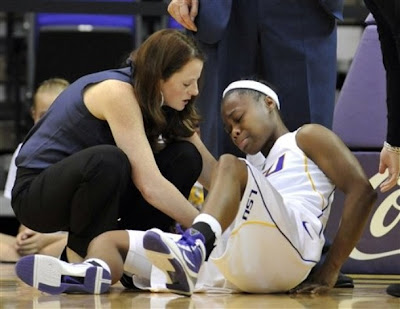 World renowned athlete development specialist Kevin Giles (@kbgiles) tweeted the following, and I had to copy and paste because of the importance of his point:

“Reading about all the England Premier League managers who are incensed at having their players injured on international duty. Reaction is understandable in this pressure-cooker league - jobs are at stake. Might be a worthwhile project for them to see if they are making any contribution to the problem.

I would bet that many of the injuries had their birth during the training being done by the person responsible for the long-term training. Instead of waiting for the problem to happen and then complaining about it, why not 'question your assumptions'? Are you creating a process of training that is both performance enhancing and injury reducing? Or are you simply repeating what you did as a player 15-20 years ago?

‘A long habit of not thinking a thing wrong gives it a superficial appearance of being right.’ -Paul DePodesta.”

This echoes my belief: injuries do not just happen for no reason. Acute injuries are generally obvious - you get an elbow to the nose and your nose bleeds. However, other injuries, even some that are acute injuries like an ankle sprain or even a non-contact ACL tear, often start long before the injury manifests itself as pain.

In Ireland, a player complained of shin splints. I asked that he see an expert physical therapist. Instead, he received sports massages. The pain dissipated and he trained. He felt pain again. Nobody listened when I explained that there was a cause to the injury and until the cause was remedied, the injury would continue to return.

Finally, three months into the season, he saw a running specialist who diagnosed a problem with his gait. Of course, without him, our best player, we struggled for those three months, and I lost my job even though nobody within the club - from the player to the management - listened. They were caught in their long habit of thinking that gave them a feeling of being right.

When organizing training, whether a sport coach or a strength & conditioning coach, do you account for injury prevention? Do you ensure proper movement efficiency before adding intensity? Do you teach/correct movement technique?

I knew my limitation. I knew something was wrong with the player, but I also knew that I was not a gait specialist, especially compared to a guy who has trained Olympians. I knew that I was not the one to solve his problem, that he needed specialized help. However, I knew this much. I knew enough to recommend the specialist as a means of rehabilitation.

Movement efficiency comes before sport-specific skill execution. Players must know how to run, stop, jump, land, etc before they can dribble, shoot and defend. Since players start and specialize earlier, the onus falls more and more on the sport coaches to teach and refine these general abilities and fundamental movement patterns as a part of the practice schedule. If they play basketball year-round, and do not learn these techniques during basketball, when are they supposed to learn these movement skills?
Posted by BOB STARKEY at 4:19 PM