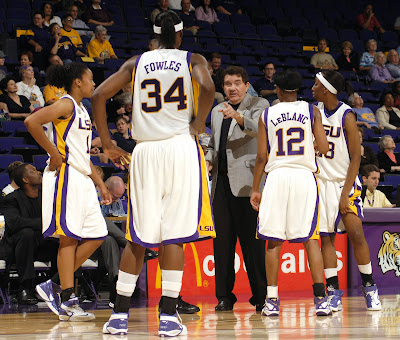 Was sharing some thoughts via email with Josh Keys, the assistant coach at the College of Charleston this morning on transition defense.  He wanted to know our philosophy and this is what we shared with him.

the first thing we talk to our team about in terms of transition defense is out offensive responsibilities. Each player on the court has a specific role that she must fill in order for our team to be successful. This is true when we shoot the ball. Once the ball is shot you have one of two responsibilities: crash the offensive boards or sprint back on defense. The worst thing you can do is stand and watch. Here are the guidelines for our team regarding offensive rebounding.


1. IF YOU ARE A 4 OR 5 PLAYER, YOU AUTOMATICALLY GO TO THE OFFENSIVE GLASS
One of the basic advantages of motion offense is that it makes our offensive players “hard to guard.” It should also be noted that because of the movement of the ball and our movement within the offense, we should be equally “hard to blockout.”

2. IF YOU ARE THE POINT GUARD, YOU ARE SPRINTING BACK
It does not matter where you are on the offensive end of the floor — when the ball is shot you are sprinting to half-court and then turning to find the basketball.

3. A PERIMETER PLAYER BELOW THE MOTION LINE IS TO ALWAYS GO TO THE OFFENSIVE GLASS
Any time a perimeter player finds herself below the motion line when the ball is shot, we want her to aggressively attack the glass.

4. A PERIMETER PLAYER ABOVE THE MOTION LINE IS TO SPRINT BACK ON DEFENSE
Any time a perimeter player finds herself above the motion line when the ball is shot, we want her to sprint back defensively.

5. POINT GUARD DRIBBLE PENETRATION EXCEPTION
If the point guard penetrates to the basket, we want the #2 player to start rotating to the top of the key area and if the ball is shot, she is responsible for being the first player back.

6. STRADDLING THE MOTION LINE PRINCIPLE
If you are straddling the motion line, you can go to the glass if you think you have a chance — if not, sprint back. But whatever you do, don’t stand and watch!

In terms of transition defense principles we give our team the following:

#1 Convert mentally...once the defense has secured the ball, know where you have to be and get there.

#2 Don’t try to steal an outlet pass or steal the dribble from the point guard on the outlet pass...get back.

#3 In getting back, we are looking to straight line sprints...you are immediately sprinting back towards the paint...our goal is to have five players sprint back and get at least one foot in the paint before approaching their offensive player.

#5 Allow no shots in the paint in transition and allow no open looks for 3-point shooters.

#6 Once we have stopped the opponent’s break we want to immediately get into our half-court defense (it doesn’t matter if we are in man or zone)...don’t relax!


TRANSITION DEFENSE GOAL: ALLOW OUR OPPONENT NO EASY SHOTS!
Posted by BOB STARKEY at 7:14 AM