BRIAN McCORMICK ON WHY EVERYONE SHOULD SHOOT LIKE STEVE NASH 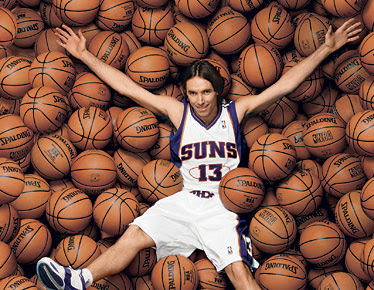 I believe Steve Nash is the best shooter to play in the NBA, at least since the NBA incorporated the three-point line. While my belief is based primarily on observation, the numbers support the theory. John Hollinger, the creator of the player efficiency rankings, ranks Nash as the all-time #1 shooter based on a combined shooting range (CSR) which adds 2-point percentage, 3-pt % and FT%.

If we agree that Nash is the best shooter of all time, why don’t more players emulate him?

Last season during the play-offs, several NBA bloggers tweeted that players who mimic a shot before shooting a free throw shot a higher percentage than those who did not. This was anecdotal and observational, and not a real study, but science supports the claim.

Nash, of course, motions to the official to hold the ball so that he can go through his routine and take a practice shot without the ball. Few other players have copied this routine even as Nash as evolved into this generation’s best shooter. One would think that hundreds of youth players would copy Nash in the same way that many in previous generations copied Pete Maravich drills in an attempt to handle the ball like the Pistol.

When we instruct youth players to use a pre-performance routine, we essentially use this model.

The Readying phase is used to create the proper attitude for performance and to control emotions. I instruct players to receive the ball away from the line and take in a deep breath through the nose and out through the mouth. This helps to slow the heart rate and eliminate tension.

When Nash attempts his practice shot, he uses the Imaging step. Rather than pure visualization, where a player may imagine a previous made shot, Nash adds the kinesthetic element. He imagines the ball going through the basket, but he also feels the shot.

This is only a portion of Brian's thoughts on this subject.  If you aren't on Brian's email list you need to be -- lot of solid, advance concepts in regard to basketball.  Email Brian to get on his mailing list at: hard2guardinc@yahoo.com
Posted by BOB STARKEY at 4:04 PM