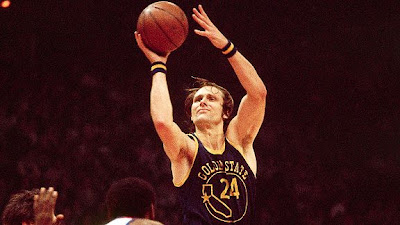 
Technique: "First, he gets his hand set properly under the ball. Then he shoots the ball "up," not "at" the basket. He also has a great follow through on his release. Rarely, if ever, will the ball miss to the left or to the right. Great shooters miss a hair long or a hair short. Missing left or right indicates a problem with the shooting form."

Confidence: "I'm sure Jose believes he's going to make every free throw he shoots. I know I did when I made 60 in a row, which was then a league record. There isn't any pressure when you have confidence. When your confidence wavers, that's when you start feeling pressure. Pressure only exists if you allow it to exist."

Routine: "All great free-throw shooters have a consistent routine. Basically, they do the same thing every single time they shoot. They program themselves to the point that once the ball is handed to them at the free-throw line, whatever was in their mind goes away. The routine takes over immediately. The entire focus and concentration is on the routine, which has been repeated thousands of times. Having a consistent routine has allowed Jose to put together this outstanding string."
Posted by BOB STARKEY at 2:56 PM